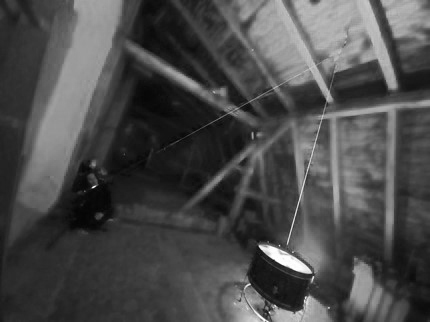 Brackish temple is a collisional space where two entities meet, carrying identical elemental qualities,
yet different transformational forms and transitional forces. It is like the water of a river and the water
of sea, that has different densities, directed by distinct flows of gravitational attraction.
These two fluids cannot be merged without being energised.
The sources of this mergence can be extended like a thread in vast space, that embodies holistic vibration
in every micro happening.

“brackish temple” is an collaboration between Antez & Alo´s Yang,
It originated from a 5 days research residency at Cross Attic, Prague.

The installation-based & site-determined sonic act explores the potentialities of the interaction among body movement,
data driven spatialisation, resonance & feedback of the space, and the object-based acoustic vibration technique by Antez.

In the center of the Antez drum membrane,
a string in tension is fixed to a structure of the building.
It transmits vibrations to a geophone which is mastered live by Alo´s Yang.
At the end of the corde,
a surface transducer also transmits vibrations whose origin is in invention with the device.

An orientation censor fixed on the body of Antez is piloted by Alois Yang
through a heterogeneous spatial sound system.