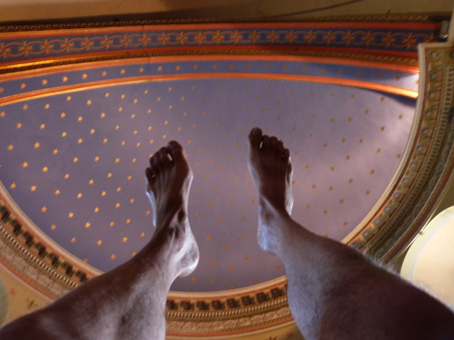 Antez.org
français
Un paso al vacio,
is a workshop of awakening to the vibration. A path on a sensitive process,
using acoustic tools and a circumambulation around a horizontal drum used as an acoustic amplifier.
You will discover an awareness of an environment in its vibratory dimension.

An instant z in a space A has a power x.


I prefer to ask the participants to have attended one of my sound actions before the workshop, I consider this moment as the first step on this path where,
for a few hours, we will walk together.


<< ...Brahmins believe that every sound in the physical world awakens a corresponding sound in the invisible realms
and incites a force to action. According to them, the sound of a word is an effective magical agent and the main
key to establishing communication with immortal entities... >>

Having been a musician from an early age, I have always been attracted to experimenting with musical language and expanding its techniques. I quickly focused on drums and percussion instruments, understanding that they were privileged tools to explore the close relationship between vibration and gesture. The drums being an instrument where each member can be an actor in the sound process, and this in a direct way and not by a gestural combination. Because of its coordination of movements and the need to have a good body anchorage, this instrument is finally very close to the practice of martial arts. I taught drums for a few years in a music school in Grenoble, and I always started my lessons with one or two kata of qi kong or kung fu. I could appreciate the difference in the preparation of my students with and without this moment of introduction to the harmony between gesture and breathing,
allowing to stimulate the connection with the void.

Many percussionists in search of sound use the rubbing technique. Whether it be through a bow or directly on the membrane or another sound body. Like them, I tried for a long time in this direction, until I simply realized that it was impossible to explore the depth of a vibration in these conditions of movement, that of a gesture going out and another for the obligatory return, interrupting the continuity of the first and then the second*.
Like the impact of the backwash of a wave.

That's when I started to do my first circulatory walks, around a drum studied as a vibratory amplification.

It was a few years after I started presenting this project on the continent that I, during an action in the south of France, met a writer who came to ask me:
<< ...Do you know what you are doing? >>
Yes, I think I do, I resonate the space and what it contains by using an acoustic amplifier and the reflections of the surrounding surfaces...
<< yes he said, you do that, but also another thing that in Latin is called circumanbulation, I am an ethnologist and I have been working for several years on this subject... >>
I have remained in contact with this man and the documents he sent me afterwards helped me to better understand the phenomena that were difficult to explain.

Over the last twelve years I have developed this unique technique of drumming, and I have had the opportunity to perform actions in places that are sometimes very old, charged with the past.*˛ This has sometimes had consequences, both on the visible and present audience, and on other parallel dimensions... So I can affirm today that this vibratory practice has the capacity to open what could be described as a vortex.
A connection between the earth and the sky and I am only one of the agitators of one of these ancestral processes.

Last summer I was invited as a "pedagogical expert" to lead with others an artist residency in Stalt Wehlen, near the Czech border. At first I proposed a workshop that was familiar to me, based on the observation of cognitive biases and the possibility of interpreting them,*3 but I quickly interrupted this work because many people were asking me for an initiation to my drumming technique. Until now I had been reluctant to let people I didn't know touch my objects, considering that everything is fluid and magnetic energy. I have therefore overcome this fear, even if it may require some work afterwards. I have often wondered about the impact that the mystification and sacredness of objects and rituals can create.
Considering that everything remains within reach of everyone, it is only a question of will, faith or obedience.

We were therefore about fifteen participants, but after two days I decided to continue this work with only two people for the remaining ten days. It seemed obvious to me that they had real predispositions in comparison to their fellow participants. Their movements and body anchors seemed to me to be a promising basis. It turned out that these two young Russians were not "artists" but were also invited to lead a workshop, a kind of yoga, gym, psychomagic that they proposed to practice in the forest...  I remember that my nights were short because I spent a lot of time to find the right words, how to talk about something which was only based on my sensitivity and which after years had become instinctive to me ?
The intellect has no place in a practice that requires an immersion in the void, that will itself be filled by the vibration.

We were soon confronted with a dilemma, their gestures and postures seemed right to me and yet it was impossible for them to produce certain frequencies that I played to them with the same objects.
After much thought and attempt, I realized that it was not just a matter of drawing energy from certain parts of the body. It was also a question of issuing an intention, of undertaking a mental projection. This vibration had to be present before it sounded, it had to be called, desired, and its body and mind opened to it so that it could exist and be embodied.

Aya and Yam presented an action at the end of the course that impressed everyone. We met again a month later in Praha and continued this journey..


* It is possible with the rubbing of a bow on strings to maintain the same frequency during the continuity of its outward and return movement. But on cymbals or other sound objects of higher density this seems to me to be impossible or only in high frequency harmonies. In the body of the vibration, there will always be two discontinuous frequencies, the outward and the return. Other objects such as a thin stick rubbed in its length between two fingers of one hand, then the other, can allow to obtain a continuity of the vibration, but this one will also remain on the surface and will not draw in the depths of the matter in vibration. Only a circular movement of the body can maintain an initial vibratory contact position with the material and choose its registers.

Name or circumanbulation used during rituals, non-exhaustive list: Pradaksinâ for Hinduism and Buddhism, Haqqāfāh for Judaism, Tawâf for Islam, Kantu ritual (Annamitic chain) South East Asia, tower inside Ming-T'ang in China, circumanbulation for Christians and Freemasons, The Irish ritual of church consecration in the Middle Ages, Ambarvalia rite among Romans, The Legend of the Lion of Sardis among Greeks, practiced by Druids, Shaman... 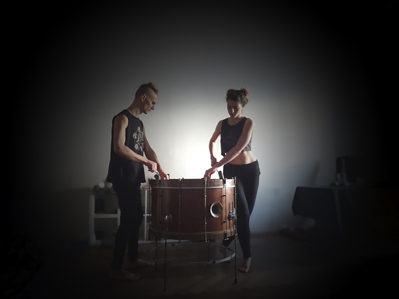 <<...Sometimes you meet people who change your life. Not only by physical actions, but simply by being present in it. I was lucky and two years ago I met antez and despite the fact that two years have passed since the moment I met with vibrations from the inside, I feel that my journey is just beginning.
P.S. perhaps find an opportunity and go to experience circumanbulation would be the best start to get a feeling for how worlds work for you also.>>   Aya.